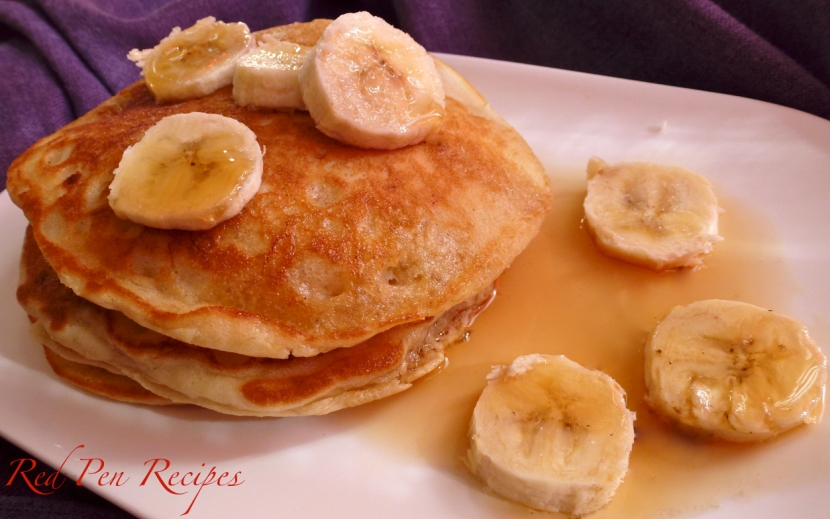 I like to take my time getting up on weekends, when my cat lets me, and making a big breakfast before starting my day. I usually go for omelets or silver dollar pancakes, but sometimes I like to try something new.

I had a couple bananas ripening on my counter last week, but wasn’t in the mood to make banana bread. So I transformed them into these banana pancakes from Williams-Sonoma. Of course, just reading the recipe got Jack Johnson’s “banana pancakes” song stuck in my head, so I had to dig it up to play while I got to work in the kitchen. It set the tone for a lazy Sunday.

These were the best banana pancakes I’ve ever made. They were fluffy and — because I chose not to completely mash the fruit — had tiny chunks of banana in them. I used almond milk because I didn’t have regular milk on hand and it worked surprisingly well.

I cut the recipe in half since I was only cooking for myself and it made six pancakes, so I had them for two breakfasts. They were beyond delicious both times.

So get your Sunday started right by heading to the kitchen and making a batch of these pancakes. You’ll be glad you did.

Cut the butter into 3 equal pieces. Put 2 of the butter pieces in a small saucepan and set the remaining piece aside. Set the pan over medium heat and stir with a wooden spoon until melted, 1 to 2 minutes. Using a pot holder, remove the pan from the heat and set it aside to cool.

In a bowl, combine the flour, sugar, baking powder and salt. Mix with a fork until well blended.

Put the banana in a small bowl. Mash with a fork until almost smooth. Add the milk, eggs and vanilla and stir with the fork until well blended. Pour the banana mixture and the melted butter into the flour mixture. Mix gently with a rubber spatula until the batter is just blended. The batter should still be a little bit lumpy.

Put a griddle over medium heat until hot. To test if the griddle is hot enough, flick a drop of water onto it. It is ready if the drop dances quickly and evaporates. Put half of the remaining butter onto the griddle and spread it with a metal spatula. Drop the batter by 1/4 cupfuls onto the griddle, spacing them about 3 inches apart.

Repeat with the remaining batter. Serve the pancakes while still hot with maple syrup and sliced bananas. Makes 12 4-inch pancakes. 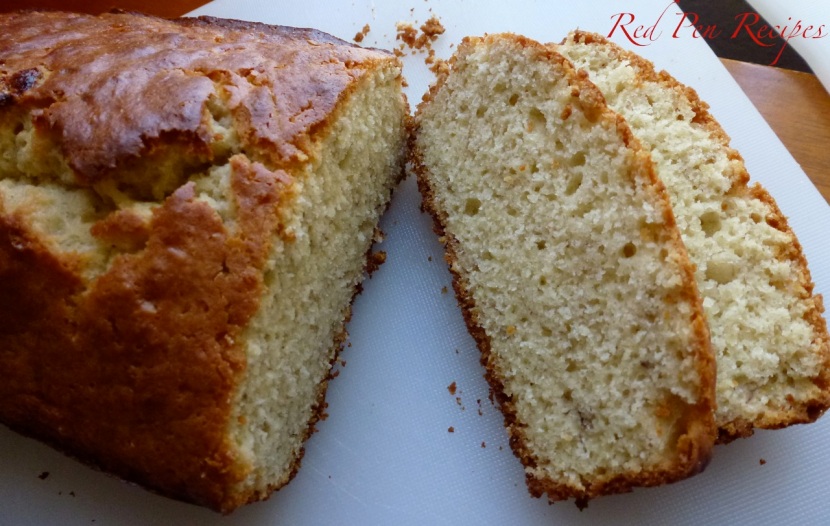 Everyone has a favorite banana bread recipe. It’s one of those classic things that most people have on hand, even if baking isn’t something they do on a regular basis.

I love my mom’s banana bread, but it didn’t translate well at high altitude. I also tried the Banana Bread Cockaigne from the Joy of Cooking, which is my second favorite recipe, but that had issues, too. So, I toyed with it until it came out perfectly.

While three bananas work well at much lower altitude, they make the bread overly mushy at altitude. So, I reduced the number of bananas to two and used less baking powder as well. I checked the bread 45 minutes into the baking process and, while it looked done, it wasn’t fully cooked inside. I left it in for another 10 minutes and it turned out just right. It stayed moist and the crust was not overcooked.

If you’re in the mood to put a spin on the bread, you can add seeds from one vanilla bean. I’ve done that before and it can be a nice change if you’re looking for a more dynamic loaf. The original recipe also suggests adding 1/2 cup chopped nuts or 1/4 cup finely chopped dried apricots.

Grease a loaf pan and preheat the oven to 350 degrees F.

Scrape the batter into the loaf pan. Bake the bread for 50-55 minutes, or until a toothpick inserted in the center of the loaf comes out clean. Cool slightly, then take out of pan and cool completely on a rack. 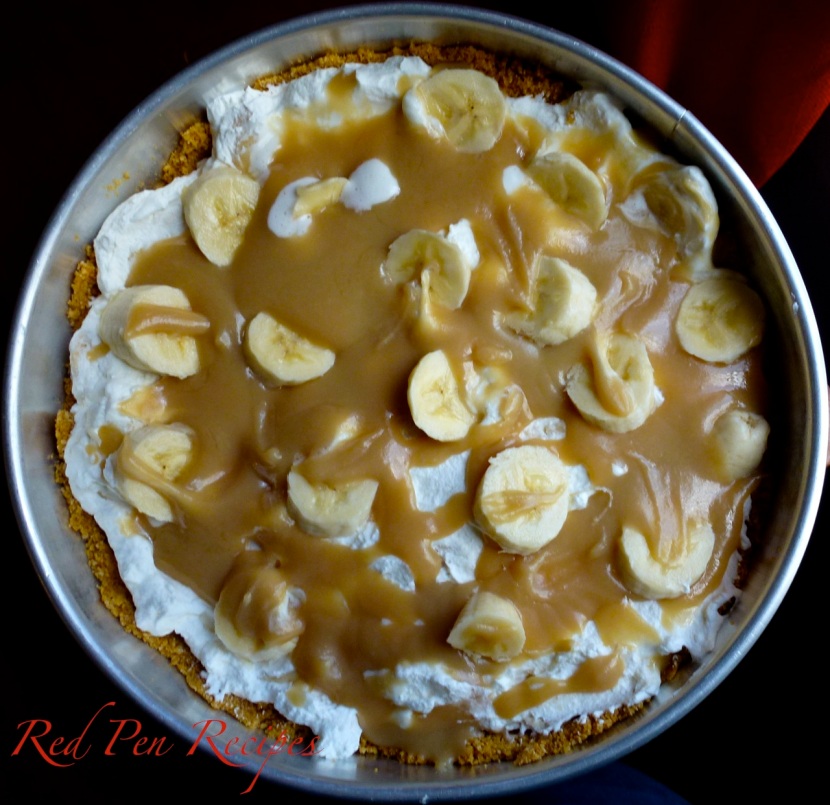 I first made a Banoffee Pie years ago after seeing Curtis Stone make one on “Take Home Chef.” It looked easy and I was pleased that I found it just as simple to make at home. The pie gets its name because it uses bananas and toffee. Making the toffee sauce is the only part that really takes much effort — and it doesn’t take much if you follow the instructions. The pie is framed by a simple graham cracker crust, filled with a base layer of toffee sauce, then topped with whipped cream with bananas folded into it. The rest of the toffee sauce is drizzled on top. It’s easy as, well, pie.

The nice thing about this recipe is that you get a lot more flavor than you might expect. When I first made it, I was worried about getting a mouthful of whipped cream, but the sliced bananas that are folded into it keep that from happening, and the toffee sauce on the top and bottom add a certain richness to it.

For the record, let me say that this is not a banana cream pie. There are bananas and cream, but they are not blended together as they are in the traditional desert.

Another plus is that you can do this in parts if you’re strapped for time. I made the crust and toffee sauce the night before, then made the whipped cream-and-banana filling the day of so it would be as fresh as possible.

This is a great option if you’re short on time and want to serve a light, flavorful dessert. It was a big hit with the birthday girl. 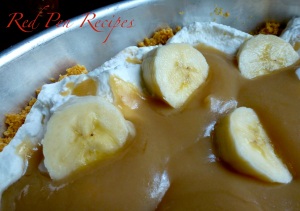 Line the bottom of a 9-inch springform pan with parchment paper.

Chop the graham crackers in a food processor until they are finely ground.

Pour the melted butter over the crumbs and process to blend well. The crumbs should stick together when pressed.

Press the crumb mixture over the bottom and 1 1/2 inches up the sides of the springform pan. Refrigerate.

To make the toffee sauce, place a heavy medium saucepan over medium heat. Combine the sugar and 3 tablespoons of water in a medium heavy saucepan. 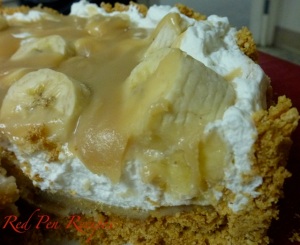 Stir over medium heat until the sugar dissolves. Increase the heat and boil without stirring until the color is deep amber, occasionally swirling the pan and brushing down the sides with a pastry brush dipped into water, about 5 minutes.

Stir in the condensed milk and butter. Continue stirring for 5 minutes or until the sauce thickens slightly.

Remove the toffee sauce from the heat and spread 1 cup of the sauce over the prepared crust and refrigerate for about 1 hour or until the toffee is semi-firm. This can be refrigerated overnight if you prefer to prepare the rest on the day it will be served.

Using an electric mixer, beat the cream in a large bowl until thick and very soft billowy peaks form.

Very thinly slice three of the bananas into discs.

Fold the sliced bananas into the softly whipped cream and spoon into the prepared pie crust.

Slice the remaining bananas and arrange them decoratively over the pie.

Drizzle some of the sauce decoratively over the pie. If the sauce has thickened too much to drizzle, stir a few tablespoons of milk into the sauce to create a thinner consistency.

Cut the pie into wedges and transfer to plates.

Drizzle each pie wedge with more sauce and serve. 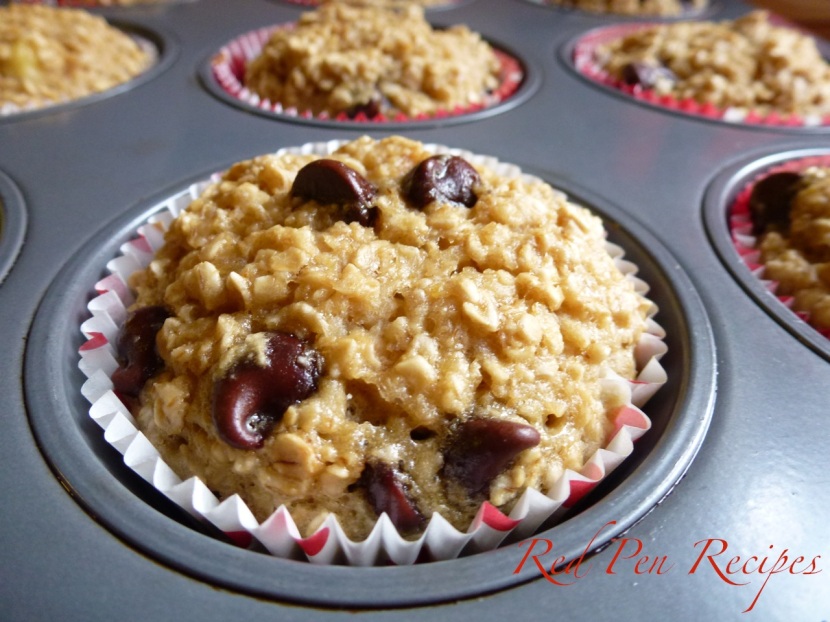 This week’s recipe comes from Pinterest. I was looking for a recipe for chocolate chip muffins and found these banana chocolate chip baked oatmeal singles.

There is no flour used in these muffins. Instead, the main components of the mixture are oats, bananas, milk and eggs. The muffins don’t end up light and fluffy; they end up with a bit more of a dense, eggy texture. The flavor is well-rounded and the ingredients make this recipe healthier than other options may be.

These muffins are nice to have on hand during a busy week — you can make them ahead of time and have them grab-and-go ready for weekday breakfasts or snacks. I used mini chocolate chips when I made them because I prefer the smaller bits of chocolate in smaller muffins.

One step that I have found is particularly important to take at high altitude is to spray the paper cupcake holders with cooking spray. For some reason, baked goods tend to get a good grip on the paper otherwise, leaving the person eating them to have to peel away a good layer of the muffin. Who wants to do that with something so delicious?

Combine the oats, brown sugar, baking powder and salt in a large bowl and stir until thoroughly mixed.

In a separate bowl, whisk together the egg whites, egg, mashed banana, milk and vanilla. Add to the dry ingredients and stir until blended together. Mix in chocolate chips.

Spoon the oatmeal mixture evenly between the prepared muffin cups. Bake uncovered for 18 to 22 minutes or until oatmeal is lightly browned and a toothpick inserted into the middle comes out clean.