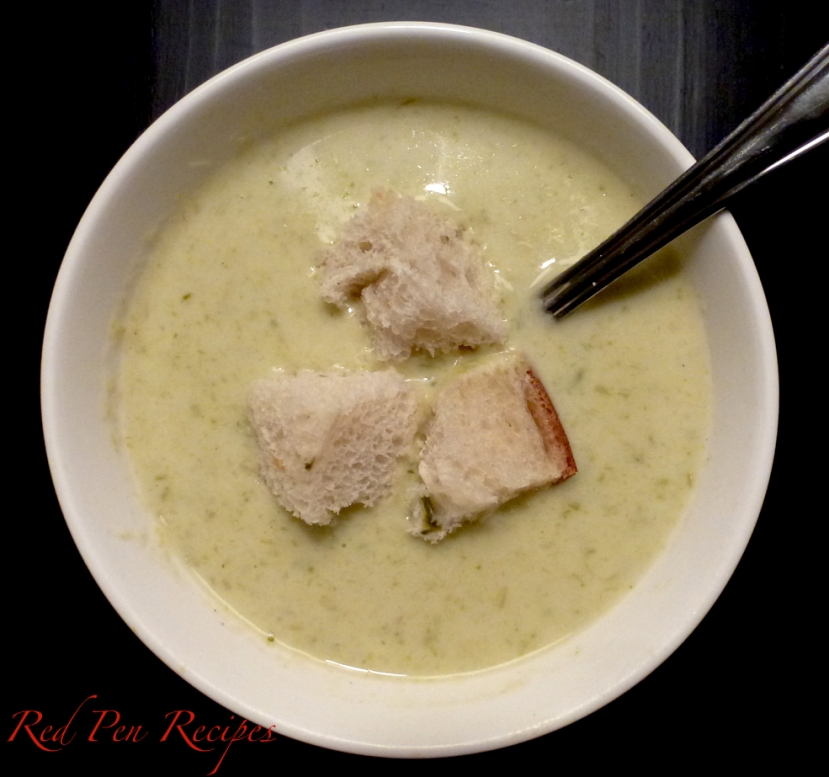 I’ve never done much with asparagus other than cook it on a stovetop or bake it. Since the weather has been freezing, I’ve been coming home to make dinners that will warm me up.

This cream of asparagus soup from Joy is a great way to use the vegetable. It takes about 45 minutes from start to finish, and has a nice consistency — it has cream, but doesn’t become too thick. I didn’t have chicken broth, so I used bullion and water. It was saltier than I wanted it to be, so next time I’ll use less than 1 tablespoon of bullion per cup of water.

I garnished the first bowl with shredded Parmesan, but that wasn’t quite right. The bread cubes were a much better choice.

All in all, this was a nice soup that I will be making again because it don’t involve a lot of ingredients, nor does it take too long to make.

Melt butter in a soup pot over medium heat.

Add onions and cook, stirring, until tender but not browned.

Reduce heat to medium-low and simmer, partially covered, until the asparagus is very tender, about 25 minutes, stirring occasionally. Using a food processor or an immersion blender, process until smooth. Return the soup to the pot and stir in heavy cream. Heat through, but do not boil.

Add salt and pepper. Garnish with grated cheese such as cheddar or Parmesan, or add 1-inch cubes of bread.