I love the farmers market in the fall. All of the vibrantly colored fruits and vegetables fill the booths in an enticing display that makes me want to buy everything and then run home and find new recipes to try. But, I only cook for one, so I remind myself to keep it reasonable and pick up different things each week so I can still satisfy my desire to be creative in the kitchen.

Last week, I picked up some homemade root beer, as well as some beets and carrots to use for a recipe I had in mind.

In addition to being ridiculously gorgeous, this carrot-beet slaw is also quite tasty. With the exception of toasting the pistachios, it’s also completely raw.

Because I bought bullseye beets instead of regular red beets, I had to roast them in the over for about an hour to encourage the flavor to come out. Had I gotten normal beets, I’d have used them raw.

As with most first attempts at a new recipe, I always follow the instructions exactly. I was hesitant about soaking the raisins in vinegar, but decided to trust the creative chefs at Bon Appétit because they certainly know more about cooking than I do.

I was floored by how good this was. There was so much flavor and texture to make this interesting and completely delightful. The parsley, mint, and red pepper flakes made the flavor so dimensional. I devoured it. And then went back for seconds because, with this salad, there is no guilt in going back for more. 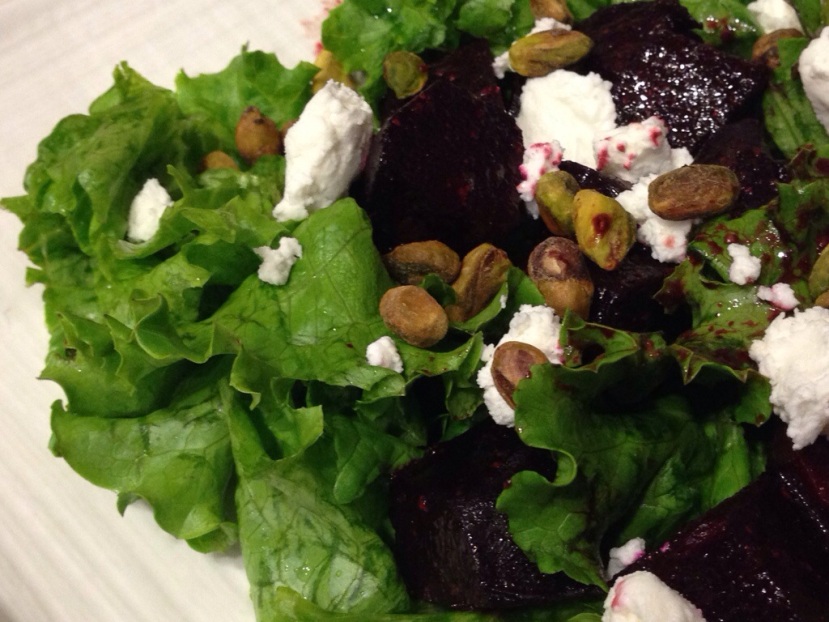 Since I now have a job with normal hours, it’s a lot easier to plan meals ahead of time.

It wasn’t until I started cooking with beets about a year ago that I really started to enjoy them. I usually use them in either salads or cook them in my dutch oven with a roast.

This salad is all about texture. It has hearty beets, a nutty crunch, creamy goat cheese, and balsamic vinegar that really sets off the flavor. It’s one of the Barefoot Contessa’s recipes. Her version called for almonds and arugula, but I only had pistachios and romaine lettuce, so I went with it. Arugula probably would have been better, but it was good just the same.

This is a great meal on a warmer day. As we head into summer, I’ll be looking for more great salads to make at home.

Preheat the oven to 400 degrees.

Wrap the beets individually in aluminum foil and place them on a sheet pan. Roast them for 50 minutes to 1 hour, depending on their size, until a small sharp knife inserted in the middle indicates that they are tender. Unwrap each beet and set aside for 10 minutes, until cool enough to handle. Peel the beets with a small, sharp knife over a piece of parchment paper to prevent staining your cutting board.

Meanwhile, whisk together the vinegar, olive oil, mustard, 2 teaspoons salt, and 1 teaspoon pepper and set aside. While the beets are still warm, cut each one in half and then each half into 4 to 6 wedges and place them in a large mixing bowl. As you’re cutting the beets, toss them with half of the vinaigrette (warm beets absorb more vinaigrette), 1 teaspoon salt, and 1/4 teaspoon pepper. Taste for seasonings.

Place the arugula in a separate bowl and toss it with enough vinaigrette to moisten. Put the arugula on a serving platter and then arrange the beets, almonds, and goat cheese on top. Drizzle with additional vinaigrette, if desired, sprinkle with salt and pepper, and serve warm or at room temperature.

This month my blog is going to be all about side dishes. To kick off the theme, I’ll introduce the most beautiful side dish I’ve ever made. I came across this recipe for beet and goat cheese napoleons on Pinterest a couple months ago. I’ve been eating beets lately and wanted to try something other than roasting them.

While I always like to make things that taste good, sometimes I’ll take the time to make something pretty, too.

A mandolin makes slicing the beets evenly a lot easier, but it’s not a necessity. You can cut the beets with a knife as long as you keep the thickness as uniform as possible. I don’t have a biscuit cutter, so I used the mouth of a glass to make the beet slices the same shape. I saved the beet scraps and made a beet salad for lunch the next day.

I don’t have presentation rings because they’re not something I see myself using on a regular basis, so my presentation of this dish is wanting. Luckily that doesn’t affect the flavor. I expected the overall taste to have a bit of a fresh, tangy flavor to it because of the goat cheese, but the honey in the mixture made it sweeter than I had imagined, and that was a pleasant surprise.

Because I was making this for myself, I made two beet towers instead of the four or so the original recipe serves. I’ve pared down the ingredients so the recipe below produces two servings. I saved the second beet tower in a bowl, covered by plastic wrap, in the fridge for two days, and it kept, though the top beet layer was slightly dry and the beet juice had stained the goat cheese a pinkish purple color. I wouldn’t keep these refrigerated for longer than that. I served mine with pork, but it could stand alone for a vegetarian meal.

Preheat the oven to 350 degrees F.

Wrap the beets individually in aluminum foil. Bake for 1 hour, until a knife is easily inserted into the beet. Let them cool, and peel the skin off. Use a mandolin to slice the beets about 1/4-inch thick. Use a biscuit cutter to cut out beet slice circles.

Mix the sage and parsley with the goat cheese. Add the honey and season with freshly cracked pepper and salt to taste. Put dollops of goat cheese in between layers of sliced beet, until you get five slices of beet per napoleon. Serve with the chopped pistachios on top and watercress on the plate.