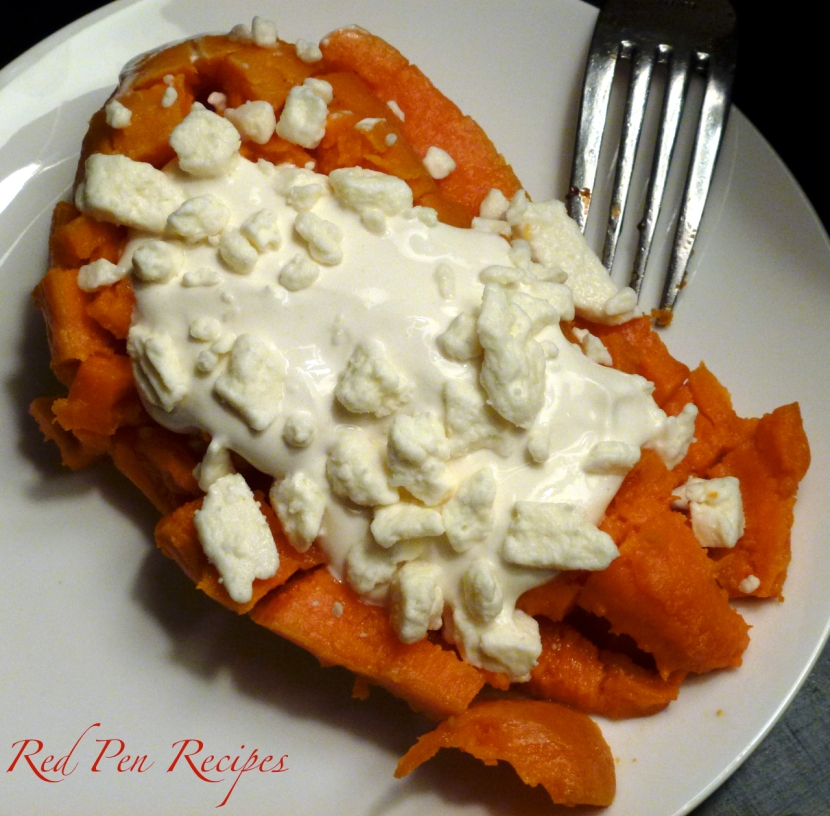 Growing up, the only kind of baked potato my family ate was a russet potato. I saw a lot of recipes for baked sweet potatoes on Pinterest last fall, but never tried any. Last week, I had two that I needed to use, so I decided to try baking them.

When I’ve had sweet potatoes in the past, they’ve involved some sort of sweeter flavor and ginger; while baked potatoes have had sour cream and chives. I decided to find a happy medium, so I stirred a bit of powdered ginger and maple syrup into some sour cream to top these baked potatoes. They were delicious. Next time, I might add either some arugula, chives or chopped green onions for some color. But for a first attempt, I was pleased with my creation. It complemented the steak I had with it.

What do you put on your baked sweet potatoes?

Scrub the dirt off the outside of each sweet potato. Pat dry. Pierce each potato with a fork five times. Wrap each potato in foil. Once the oven has preheated, set potatoes on the rack and set timer for 45 minutes. After 45 minutes, check potatoes for doneness. Mine took another 30 minutes before they were done.

Once potatoes are done, remove them from the oven and let cool for 5-10 minutes.

Using a knife, cut potato just through the skin on the length of the long side. Peel skin and toss. Cut potato halfway through with three lengthwise cuts, then make five cuts crosswise. Spoon two tablespoons of the sour cream mixture and one tablespoon of feta over each potato.