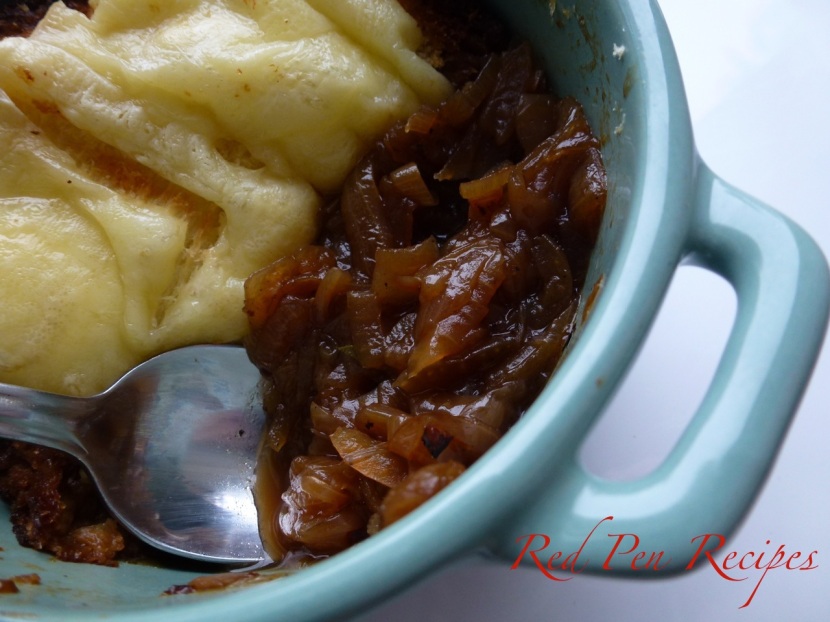 French onion soup is never something I’ve craved. I think I may have tasted it once at a restaurant years ago, but hadn’t given it much thought since. I’ve been eating a lot of soups and stews this year, and I wanted to expand my repertoire. I wanted to go outside my comfort zone.

I browsed the Food Network site, as I so often do when looking for inspiration, and chose Alton Brown’s French Onion Soup recipe at the recommendation of a friend. I had never heard of French onion soup with Cognac and apple cider. I was intrigued.

Cutting onions always makes me tear up, so I wanted to slice them in the fastest way I could. I took out my mandoline slicer and did it quickly — and without tears. The mandoline made it a much easier process than it would have been otherwise. If you have one, I recommend using it for this soup.

After slicing the onions, cooking the soup became a slower process, but it was completely worth it in the end. It made about six servings, so I had lunch all set for the work week.

Many of the reviewers said the soup was a bit too sweet. The first time I made it, I agreed with them. But the second time around, I used two red onions instead of two sweet onions, and I used a less concentrated cider. It helped tremendously. Smoked fontina also addedI wouldn’t change anything else because, at the end of the day, I’d learned a new recipe and had something to warm me up as the snow fell outside.

Trim the ends off each onion then halve lengthwise. Remove peel and finely slice into half moon shapes. Set electric skillet to 300 degrees and add butter. Once butter has melted add a layer of onions and sprinkle with a little salt. Repeat layering onions and salt until all onions are in the skillet. Do not try stirring until onions have sweated down for 15 to 20 minutes. After that, stir occasionally until onions are dark mahogany and reduced to approximately 2 cups. This should take 45 minutes to 1 hour. Do not worry about burning.

Place oven rack in top 1/3 of oven and heat broiler.

Cut country bread in rounds large enough to fit mouth of oven-safe soup crocks. Place the slices on a baking sheet and place under broiler for 1 minute.

Season soup mixture with salt, pepper and cognac. Remove bouquet garni and ladle soup into crocks leaving one inch to the lip. Place bread round, toasted side down, on top of soup and top with grated cheese. Broil until cheese is bubbly and golden, 1 to 2 minutes.

One thought on “A fresh take on French onion soup”