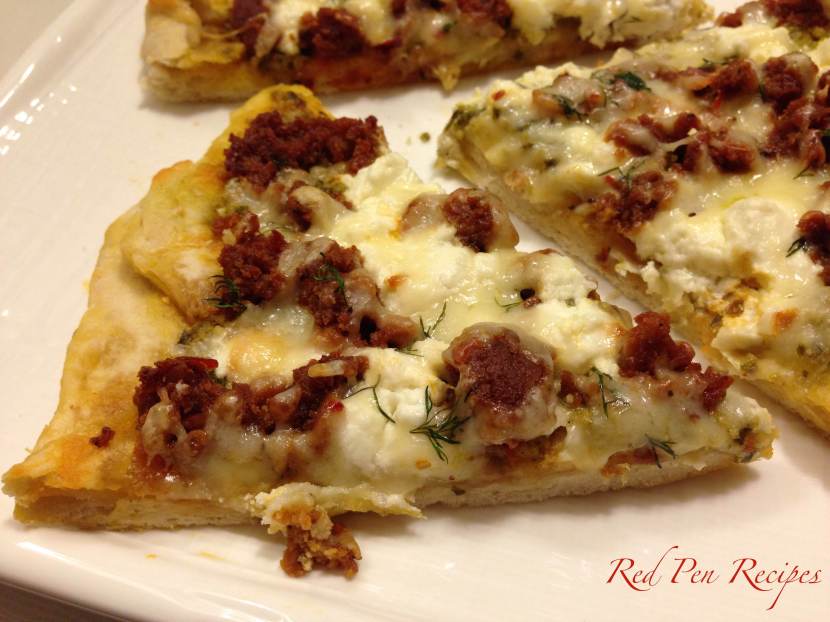 I’ve been attending a lecture series on animals by Seattle Arts and Lectures. During one of the lectures, the speaker discussed the farming industry and mentioned that the rate at which humans consume meat simply isn’t sustainable as the population continues to grow. He mentioned finding alternate products, such as items made by Field Roast, a Seattle-based company that makes meat-like products out of grains and vegetables as a protein alternative. On my next trip to the store, I spotted some Field Roast sausage on the shelf, so I picked it up to try it. I’ve never liked regular sausage—mostly because of the texture—but this appeared to be a little different. I broke one of the links up and added it to a scramble the next day. It was really good.

I still had a link left when I got a craving for pizza last night. I didn’t want to wait too long for pizza dough to rise properly, so I opened up my Smitten Kitchen cookbook to the recipe for Rushed Pizza Dough and got to work.

As the dough was rising, I looked through my fridge for more toppings and found some locally made goat cheese and some Beecher’s Smoked Flagship cheese. I thought they’d help tone down the spiciness of the sausage a bit. I also had some fresh pesto and dill on hand to round out the flavors. It was definitely the best pizza I’ve made in recent memory, and a combination I plan on recreating.

Pour 1/2 cup warm water into a large mixing bowl, sprinkle the yeast over the water, and let it stand for 5 minutes. Add the flour, then salt, and mix with a wooden spoon until a rough, craggy mass forms. Turn dough and any loose bits out onto lightly floured counter, and knead for 5 minutes or until a smooth, elastic dough forms.

Coat inside of mixing bowl with olive oil, place dough back in bowl, then cover with plastic wrap. Place in previously warmed oven, and let it sit for 30 minutes, or until doubled. Remove dough from oven and preheat oven to 425 degrees.

Using your hands, shape the dough into a circle on a baking sheet lined with parchment paper.

Spread the pesto around the shaped dough, leaving about a half inch of space between the sauce and the edges. Break apart the sausage and sprinkle onto the pizza. Do the same with the goat cheese. Grate the goat cheese over the top, and sprinkle the dill on. Bake for 10 minutes, or until crust is lightly browned. Cut and serve.