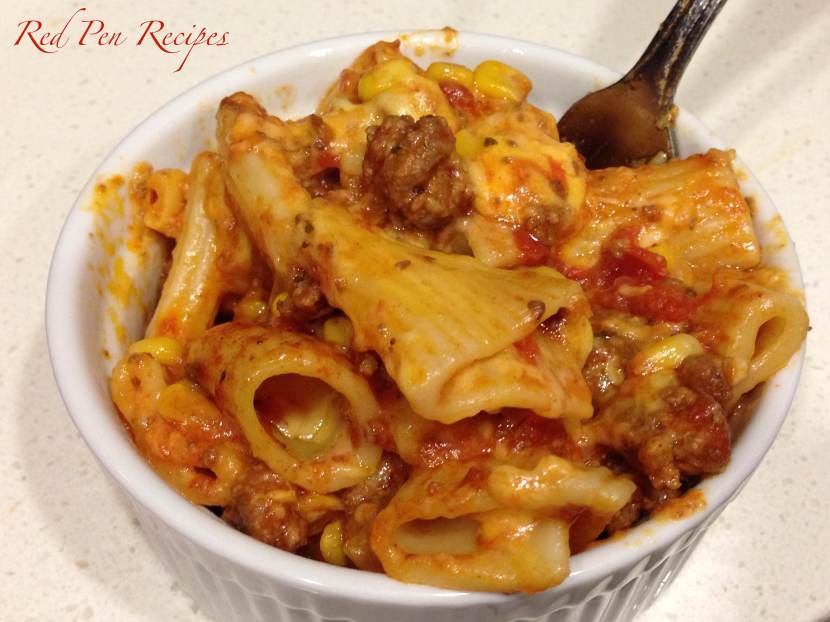 Did anyone else grow up eating goulash? I’m not talking about the stew so much as the pasta version. Is that a weird Midwestern dish West Coasters haven’t heard of? I had an odd hankering for it last week, so I made a batch and, when I took some of the leftovers to work for my lunch, my coworkers didn’t seem to know what it was when I told them. The only one who had heard of it was from the Midwest, which is where my mom’s side of the family is from. I didn’t know if this was a dish grandma concocted and mom carried on making, or something more people ate. For those of you who haven’t had it, it’s kind of a more deluxe, less cheesy version of macaroni and cheese.

In any case, my mom wasn’t home to answer the phone when I called for the recipe last week, so I made a version of it based on what I remembered eating when I was a kid. The store didn’t have large elbow noodles—which is traditionally used for this—so I went with rigatoni, which I ended up liking because there was more room for the sauce inside of the noodles. The sauce in this version was a little thicker than I remember it being in my mom’s version, but it was good. Not bad for making it from memory. If you don’t want to add the cheese and bake it, you can serve it right out of the frying pan.

Bring a large pot of water to a boil over high heat. Add the rigatoni and boil until cooked. Drain and set aside.

Meanwhile, in a large frying pan over medium heat, cook the ground beef until browned. Add the tomato sauce, diced tomatoes, and corn and simmer. Add the pasta, garlic, herbs, and spices. Stir until combined.

Preheat the oven to 350 degrees.

Pour a third of the goulash into a dutch oven. Top with 1/3 cup of the cheese. Repeat three times. Bake for 30 minutes. Serve warm.