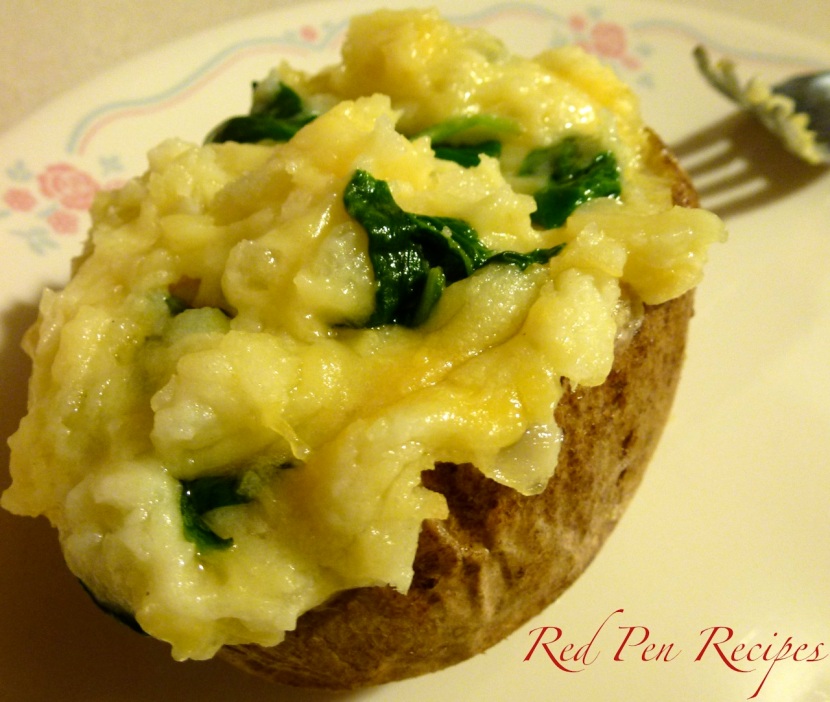 Baked potatoes are good, but sometimes twice-baked potatoes are better. This was the first recipe I tried from the Williams-Sonoma Cookbook that my brother bought me for my birthday a few years ago. It’s probably one of the more decadent baked potato recipes you’ll ever make. One of these could be a meal in itself, but they also go well with salmon or steak.

I like this recipe because it’s straightforward, and the ingredients are something most people have on hand. If you don’t have one of the ingredients, it’s easy to substitute or just do without. This recipe can easily be halved or doubled, depending on the number of people you’re serving.

The one warning I have is that the cheese can make it oily after it bakes. I recommend either using less cheese or using a harder, aged cheddar instead. If you don’t like cheddar, you can use whatever you’d like.

Position a rack in the upper third of an oven and preheat to 400 degrees F.

Prick the potatoes with a fork and place them directly on the oven rack. Bake until tender when pierced with a small knife, about 1 hour. Remove the potatoes from the oven and let cool for 5 minutes. Reduce the oven temperature to 350 degrees F.

In a large, heavy pot over medium heat, melt 2 tablespoons of the butter. Add the garlic and shallot and sauté until the shallot is translucent, about three minutes. Increase the heat to medium-high, add the spinach, and toss until wilted but still bright green, about four minutes. Transfer the spinach mixture to a sieve set over a bowl and press all the liquid out of the spinach. 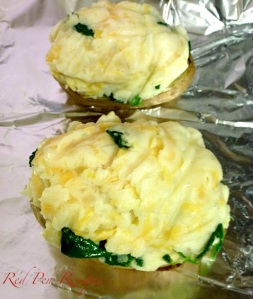 Using a serrated knife, cut a slice 1/2 inch thick off one long side of each potato and discard. Scoop out the potato flesh into a bowl, leaving a shell 1/4 inch thick. Add the sour cream, salt, pepper and the remaining 4 tablespoons butter to the potato flesh and mash with a potato masher to blend. Stir in 2/3 cup of the cheese and then the spinach. Spoon the potato mixture into the potato shells, mounding it high. Press the remaining cheese on top of the filling.

Transfer the potatoes to a baking sheet and bake until heated through, about 20 minutes. To test for doneness, stick a small knife into a potato and leave it there for about 15 seconds. Remove the knife and feel the blade; if it is hot, the potatoes are ready. Serve immediately. Serves 4.