Early last week I roasted a large portion of turkey I purchased from Costco. After eating some every day, I was left with one small portion. But I didn’t just want to reheat it. I needed to do something with it.

The first thing that usually comes to mind for me when I have leftover chicken or turkey is a pot pie. Pot pies are pretty simple, as long as you have a few vegetables and basic ingredients on hand. I’ve made pot pies before, but have never found a good recipe for the sauce. Most sauces are made of mostly flour and either water, broth or milk — some of which turn out thinner than I prefer, while others are too thick. This time, I consulted my Cook’s Illustrated cookbook, and it called for a combination of the three. While I didn’t follow the recipe to a T, I did use it as a guideline and it produced the best pot pie sauce I’ve made to date.

Traditional pot pies use carrots, celery and onion, but I all I had in the fridge were onions, bell peppers and broccolini. Together, the three worked well. That’s the great thing about pot pies — you can use just about anything you like to fill them. This makes one large pot pie, suitable for one hungry person.

Combine butter, flour and salt in a small bowl. Using your hands, mix the ingredients until the dough forms into pea-size pieces. Add water and mix in. Take three-fourths of the dough and pat into a 6-inch round oven-safe glass dish. Flatten remaining one-fourth of the dough into a disc. Wrap in plastic wrap and put into freezer alongside dish with crust. 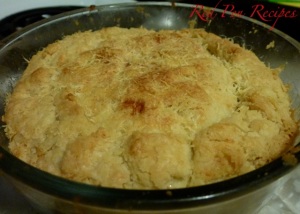 Take prepared pan and dough out of freezer. Pour filling into pan. Shape remaining dough into crust and place over filling. Pinch edges to seal crust. Using a fork, prick holes in top of crust. If desired, grate Parmesan over crust.

Put pot pie on a cookie sheet in oven for 25 minutes, or until top is golden brown. Let cool for 10 minutes before digging in.

One thought on “Transforming leftovers into comfort food”