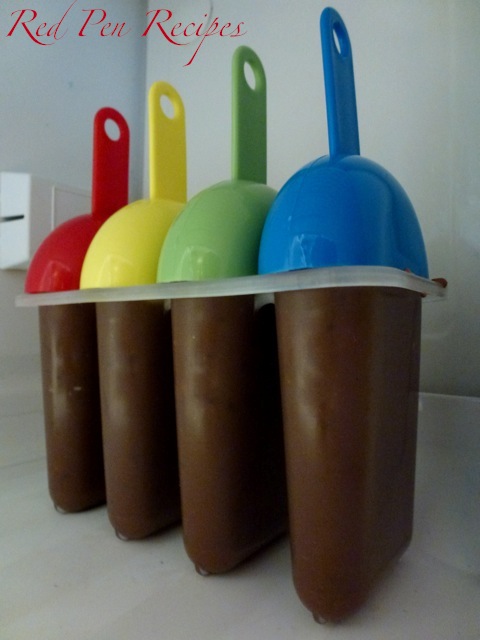 Fudgesicles have never been something I’ve reached for when picking out a frozen treat at the grocery store. I usually go for Cherry Garcia or Rocky Road. But, when it comes to trying to make new things, I don’t discriminate.

When a friend on Facebook posted something about making fudge pops over the summer, I thought that sounded like a fun thing to try — especially after the success of my coconut-rum ice cream. I was feeling confident. The next time I was at the store, I bought a popsicle mold much like the one my mom had when I was a kid, except all the handles of hers were yellow. I tried the first recipe for fudge pops and it came out of the mold fine, but had a dry, almost chalky, consistency to it, and the flavor wasn’t quite where I wanted it to be.

As I’ve said before, I don’t give up. So I tried another recipe. And another. I tried three different recipes,

a combination of the three recipes and a modified version of the one I started with. Apparently the fifth time’s a charm. I later figured out the dryness in the first recipe was caused by the cocoa powder. The second recipe called for sweetened condensed milk and it melted quickly while being taken out of the mold. It was also too sweet for my taste. The third recipe also didn’t come out of the mold very well. I cooked the ingredients to pudding consistency and it was overcooked. In fact, I ended up eating the popsicles out of the mold because they were stuck. The flavor was great, but popsicles have to, well, pop. On my fourth attempt, I tried making a variation by combining the ingredients to achieve the flavor I wanted, as well as those I had the most success with. Once again, they wouldn’t come out of the mold. The final time, I went back to the first recipe because it came out of the mold the best. I got rid of the cocoa powder and made a couple substitutions of my own. While the recipe is similar to a pudding recipe, take the mixture off the burner just before it gets as thick as you would cook pudding. These were my winners. After a page of crossed-out ingredients and notes in my kitchen notebook, I was finally able to put this one down in ink and enjoy the result out of the mold, just as proper fudgesicles should be eaten.

In the bottom of a medium saucepan over very low heat, gently melt the chocolate chips, stirring constantly until smooth. Stir in sugar, cornstarch, cocoa powder, milk and salt and raise heat to medium. Cook mixture, stirring frequently until it thickens, about 5 to 10 minutes. Remove from heat, add vanilla and butter and stir until combined.

Set aside to cool slightly then pour into popsicle molds and freeze overnight. To take them out of the mold, run the mold under hot water for about 10 seconds.