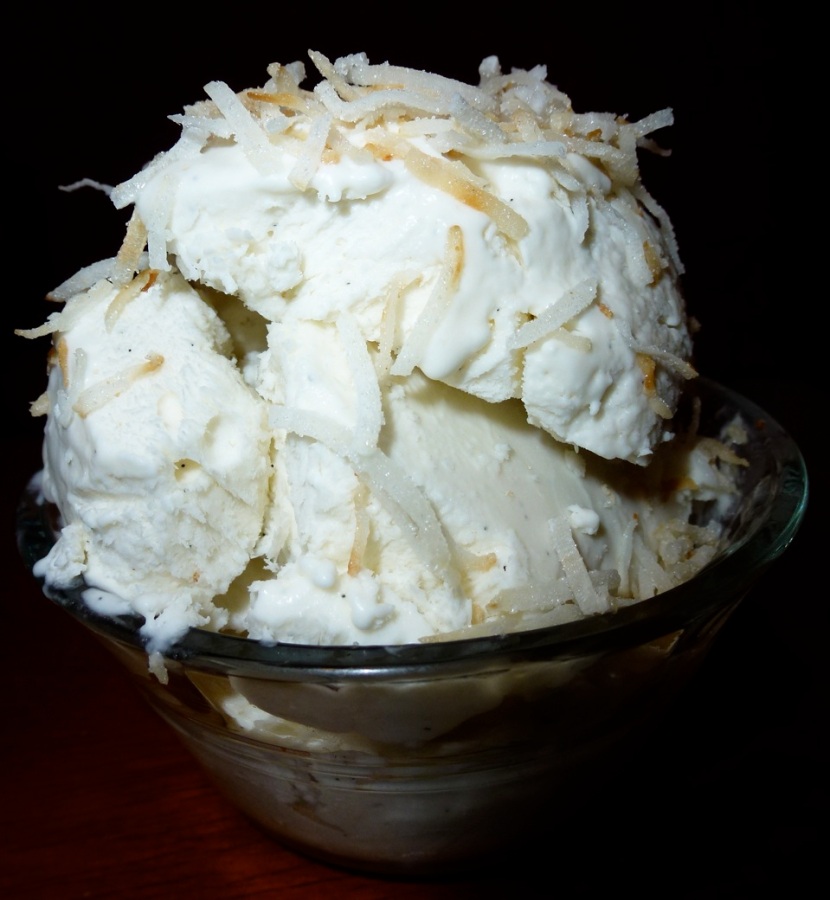 Until Saturday, I had never attempted to make ice cream. Every recipe I’d ever seen required an ice cream maker, and I never felt that was worth the investment. When I turned on the Food Network on Saturday morning, Giada De Laurentiis was doing a show on foods inspired by her Tahitian vacation. One of the things she was making was Tahitian Ice Cream. Her recipe didn’t require an ice cream maker, so I decided to try it.

The process of making the ice cream was a lot simpler and quicker than I had anticipated. Once the cream is whipped to the proper consistency, just mix in the rest of the ingredients, put it in the dish and freeze it.

Toasting the coconut proved to be more difficult. The first time I tried toasting it in the oven, as Giada’s recipe instructed, it burned. I checked it and stirred it after four minutes and put it in for another two, but it was completely black after those two minutes. The second time I tried doing it in a pan and pulled it off the burner when it turned golden brown, but I didn’t consider that it would keep cooking in the pan after I took it off the burner. It burned again. The third time I watched it more carefully and took it off the burner when it was light brown. It cooked until it was golden brown. Third time’s a charm.

The recipe calls for light rum, but all I had was dark rum, so the flavor dominated the ice cream. Next time I’ll reduce the amount of dark rum or use light rum, as the recipe says. The consistency was not as thick as store-bought ice cream, but it was still good. The toasted coconut added a nice contrast to the texture of the ice cream. I bet this would also be good served with fresh pineapple as a topping.

Beat the cream until thick using an electric hand mixer in a medium bowl. Add the sugar and continue to beat until the cream holds soft peaks. Add the water mixture, coconut milk and rum. Beat until thick and light.

Pour the mixture into an 8-by-8-inch glass baking dish. Freeze until the mixture is the texture of soft-serve ice cream, about 2 1/2 hours.

Scoop the mixture into small glasses using an ice cream scoop. Garnish with toasted coconut and serve. Freeze any unused ice cream in an airtight container.

Cook’s note: To toast coconut, place sweetened or unsweetened, shredded or flaked coconut in a single layer in a small frying pan over medium heat. Stir the coconut every couple minutes. Remove from heat when it is just starting to turn light brown. If you leave it in the pan, watch the coconut and continue to stir it until golden brown.

If freezing the ice cream for longer than 2 1/2 hours, allow the ice cream to stand at room temperature until softened, about 30 minutes before serving. Whisk the ice cream until smooth and serve.

3 thoughts on “A taste of Tahiti”