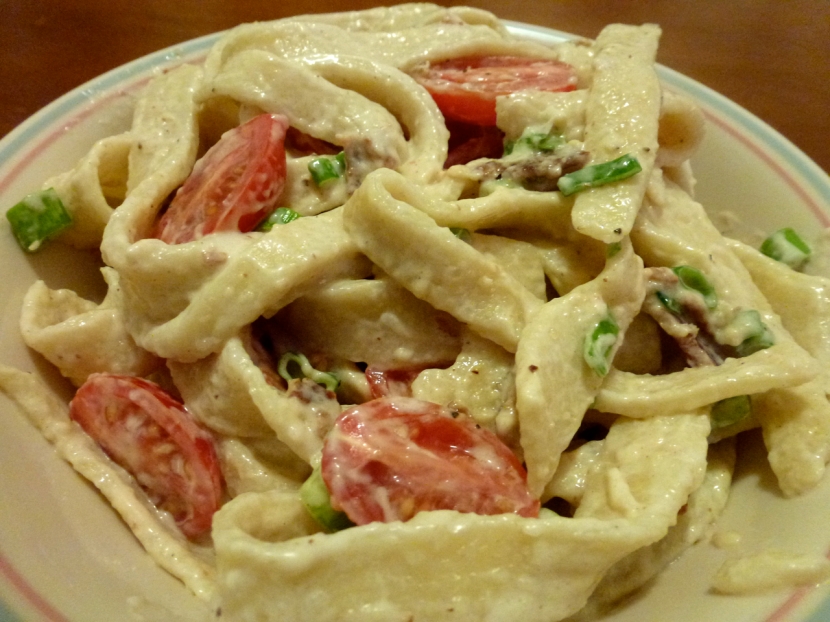 I was feeling ambitious last weekend. I had already decided to make BLT Linguine for dinner but, when I went to check to see whether I had all the ingredients, I noticed I didn’t have any linguine. I considered going to the store, but then decided I was up to the challenge of making linguine from scratch. In “High Flavor, Low Labor,” Associated Press Food Editor J.M. Hirsch says pasta is easy to make. I decided to see if he was right. It turns out making the pasta dough is easy, but the shaping process is challenging if you’re doing it by hand.

The second batch of pasta

The first batch I made turned out way too thick after it was boiled. I thought I had rolled it out thin enough, but it bulked up considerably during the cooking process. It was unpleasant to eat and I ended up throwing it out. The second time around, I cut the dough into larger sections after rolling it out, rolled out each section, then cut each section into strips and rolled the strips out. It was a lot of work and the pasta still ended up slightly thicker than I wanted it to be, but this batch was much better than the first. I have a tall kitchen table, and I’m an average height, but even kneeling on one of the chairs didn’t give me enough leverage to roll the dough out as thin as it should have been.

I’ve only made pasta one other time, and that was a few years ago when I made gnocchi, which is a long process, but completely worth it. For this recipe, making pasta by hand was more trouble than it was worth. Unless you have a pasta maker, I’d recommend using store-bought pasta. However, if you’re feeling ambitious, I’ve included the instructions to make linguine.

BLT Linguine is easy to make for a weeknight dinner. Instead of sauce, it calls for cream cheese, which might be off-putting to some, but it works. For a lower-fat version of this recipe, Hirsch recommends substituting Greek-style yogurt for the cream cheese and prosciutto for the bacon.

Bring a large saucepan of salted water to a boil. While the water heats, in a large skillet over medium heat, cook the bacon until it is crisp, 6 to 7 minutes. Add the scallions and tomatoes, then sauté for 2 minutes. Use a slotted spoon to transfer the mixture to a bowl, draining any excess fat.

Cook the pasta according to package directions. Reserve 1⁄4 cup of the cooking water, then drain the pasta and return it to the saucepan.

Add the cream cheese and half of the reserved cooking water to the pasta. Toss until the cheese is melted and forms a creamy sauce.

Knead eggs into flour until ball of dough forms. Put bowl over ball of dough and let rest for 30 minutes. Roll dough into a thin sheet and cut into strips. Put strips of pasta into a pot of salted, boiling water.